Why you need to drop ASP.NET and use .NET Core instead

The future of .NET is .NET Core, which will be soon replacing ASP.NET that we have come to know and love since 2002. But what are the primary advantages of .NET Core over the ASP.NET framework? Why should you hire a DotNet Core developer over an ASP.NET Developer? And should you transition your existing internal projects?

A Brief Overview of ASP.NET Framework and .NET Core

An ASP.NET Core Developer is very likely to also be an ASP.NET Framework developer, and vice versa, and most people share code bases and run code on both systems. Yet there are still some very clear advantages to using .NET Core over the .NET Framework.

Microsoft has put a lot of work into ensuring that .NET Core is cross-platform compatible. There is an emphasis on creating a unified system for the web, mobile devices, cloud-based solutions, and IoT devices. For those, the .NET Core is the ideal solution for people who need to run solutions on multiple platforms, or those who value the ability to move their solutions to different platforms later.

.NET Core Can Be Directly Deployed to the Cloud

Deployment on .NET Core is both simpler and more robust, with options available to directly deploy to the cloud or to self-host applications. Comparatively, the .NET Framework only allows for the direct deployment to IIS (Internet Information Server). As more companies are moving towards the cloud, this ability becomes more important.

If you're currently creating .NET Framework applications, you may find that they aren't going to be as scalable as a .NET Core solution. A .NET Core solution is more efficient, and the code that is compiled through it is automatically optimized for even greater levels of performance. Since developers are able to build, test, and launch applications directly on the cloud, they are also able to take advantage of cloud resources.

.NET Core Can Run on Core and Framework

.NET Core is generally more flexible than .NET Framework because it can run on both, and this does mean that developers in particular should consider switching over to .NET Core Development. There are many advantages to using .NET Core over .NET Framework, and these advantages are only going to grow over time as the system is further developed.

Are There Any Advantages to ASP.NET Framework?

At this point, you may be wondering whether there are any advantages to the ASP.NET Framework at all. There are some. It can be prohibitively difficult to learn the new technology if you don't have a technological partner, though if you do have a partner, the process can go more smoothly.

If you are creating an altogether new solution, it's best to go with .NET Core. .NET Core will give you greater levels of flexibility, support, and resources moving forward, and finding experts in .NET Core development will pay off over time.

It's time to switch over to .NET core. While there are always people who will hold onto old technology (and there are still companies running Windows 7...), there comes a time when new technology is simply better. And with Microsoft ready to retire ASP.NET, now is the time.

If you need help getting switched over to .NET core, contact the experts at Keene Systems for a free consultation. Let’s have a conversation to see what’s possible. We’re certain you’ll be pleasantly surprised!

To learn more about the importance of eliminating human error in your operations, please download the eBook titled "How to Automate Business Process in 7 Smart Steps." 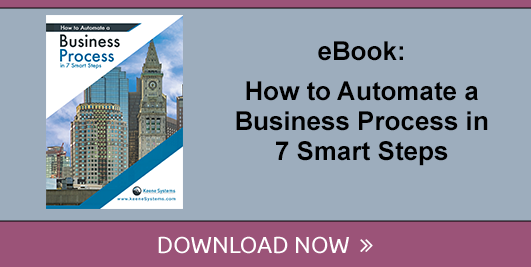