One of the most important things to understand about the modern customer is that, by and large, they expect all applications to be either web-based or fully mobile. This makes sense, given both the prevalence of people working from home and the nearly ubiquitous nature that smartphones have achieved in our lives over the last decade. People need anytime, anywhere access to critical information, and they want the apps that they use to provide it - which is problematic if you're still relying on older, legacy applications that offer absolutely none of the above.

Web App vs Desktop App: What You Need to Know

The key factor to remember about desktop apps is that most of them were originally designed for one user on a single computer before anyone even cared about data sharing in any way, shape or form. A small business in the early 1990s probably only had one computer - if it were lucky enough to have one at all. Everything was stored locally, and that was perfectly okay - because that was simply the best that modern technology had to offer at the time.

Even when data sharing did become something that was even possible, it happened entirely across a local area network (LAN). This, too, was more than acceptable because it still represented a major step forward from "the way things used to be."

With the advent of the Internet and with broadband Internet connections being in nearly every home and business across the country, more and more applications moved online - but those legacy applications were simply never designed to run this way. On the one hand, this isn't necessarily anybody's fault - they were put out into the world during a time when the types of modern requirements that today's users expect simply weren't possible. But at a certain point, businesses stopped making that "major step forward from the way things used to be" - and their productivity dramatically suffered as a result.

The major reason why companies are moving their applications to the web is not only to support a distributed workforce (something that the COVID-19 pandemic has shown us is critically important), but to also be able to directly connect with their customers. A successful organization these days needs to be in a position to accomplish both of these things at the same time, and if they're still relying on antiquated technology like legacy applications... they can't.

Truly, it doesn't get much more straightforward than that.

Thankfully, capitalizing on the opportunity to convert desktop apps to web apps brings with it a host of unique advantages, all at the exact same time.

In the end, businesses have now come to the conclusion that by migrating their desktop applications to web applications, they can take advantage of greater flexibility and far higher productivity levels in terms of their workforce. Not only can this help benefit your organization in terms of immediate performance boosts, but it can also help create the type of competitive advantage that will serve you (and your clients) well for years to come. If you needed just a single reason to finally make the investment to convert that old desktop app to a web app, let it be that one.

To learn more about why you should convert your desktop app to a web app, please download our eBook titled "Legacy System Modernization 101 - Your Guide for Success." 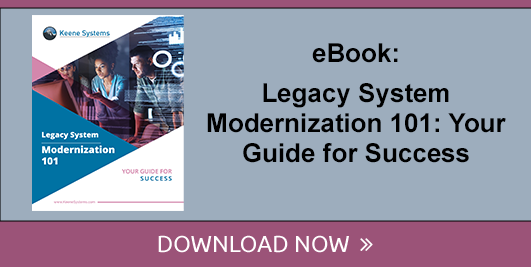