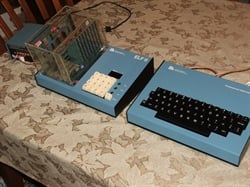 Being in the computer business I still have a fond place in my heart for my first computer. I actually still have it down in my basement, neatly packed away.

Back in 1978, when I was a sophomore in high school, I had an interest in science, electronics and computers. At the time computers were the new and upcoming thing, the sexy new technology in the world and I wanted in.  So I ordered a computer kit out of the back of a magazine with money I had saved up from being a dishwasher at a local restaurant.  It was called the Elf II (see: http://en.wikipedia.org/wiki/ELF_II).

When I received the package, I tore into the project with the enthusiasm of a small child on Christmas day. I soldered all the parts together, followed all of the directions and with great anticipation I turned it on for the first time. And nothing happened, it wouldn’t work. I was heartbroken. I went back and double checked and triple checked everything but I couldn’t find the problem. I eventually had to send it back to the manufacturer. A few weeks later I received a package from the manufacturer. I was so excited! The technicians at the factory discovered that I had splashed a blob of solder on the motherboard under the keypad. They wrote me a full page hand written note.  I was back in business!

So I fired it up and it worked! Now to figure out how to program it. This computer only had 256 bytes of memory. You heard right, 256 bytes. If you open notepad on your computer and type in 256 characters, that’s how big this computer’s memory was.  It didn’t have a monitor, only a 2 digit hexadecimal readout. It also didn’t have a keyboard, only a hexadecimal keypad. All instructions were entered as a series of 2 digit commands. 37 years later I can still remember the program to clear memory: “90 AE BE EE 70 30 03”.  About all you could do in a program was to turn an LED light on and off, simple math, and display things in the 2 digit readout.

Sometime later, and many more dishes washed, I was able to scrape together enough money to buy a full keyboard and a 4k memory board for $90 (a fortune for a kid back in the 70s). How many gigabytes of memory can you buy for $90 now? I built those components and put it all together and it worked! For a computer screen it used a radio frequency modulator that allowed me to use a standard black & white TV as a monitor.  It also had a Tiny BASIC interpreter program that was loaded from cassette tape. This took up 3k of memory and left me with whopping 1k to write a BASIC program.  And that I did. I wrote all kinds of little programs to print things on the screen and it was great fun.

That was the beginning of my lifelong passion for computers. Next, in 1980, I went into the Army as a 74F computer programmer/analyst.  After the Army I got my degree in Computer Science from Florida Institute of Technology. During that time I founded Keene Systems, Inc. in 1987.  Now Keene Systems has a staff of 30+ developers and continues to grow.  And yes I still actually write code.  It still has the same wonder and excitement and wow factor every time I kick off a new program and see it work!