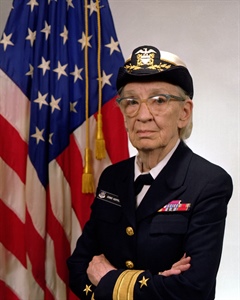 The Google Doodle of Grace Hopper brought back fond memories of when I had an opportunity to meet her back in 1981 as a fresh graduate of the Army Computer Science School. She came to lecture at the school. Even then she was a living legend. She gave a 4 hour lecture and had everyone sitting on the edge of their seats. She covered a wide range of computer topics and did it all with plenty of humor. It was quite entertaining.

She was an extraordinary woman who in 1934 earned a Ph.D. in mathematics from Yale. She joined the navy and worked on the world’s very first computers. She worked her way up in the Navy to the rank of Rear Admiral.

Harvard Mark I
Grace Hopper was one of the first programmers of the Harvard Mark I computer back in 1944. The Harvard Mark I was used to support the war effort. After Von Neumann joined the Manhattan Project he used the Mark I to validate the immense number of calculations needed to build the first atomic bomb.

Future Predictions
I’ll never forget how she talked about CPU speed and how the current rate of increase in performance could not be sustained. She drew a graph and showing computing speed on the left and years on the bottom. You could see a steady increase in computing speed over the years. Then she extrapolated from 1981 to 2000. She said, look at this speed up here around year 2000. This means to sustain the increase electricity traveling through microchips would have to move faster than the speed of light, a fundamental constant in the universe. That’s impossible so it’s not going to happen! The only solution is to build new operating systems that take advantage of multiple CPUs.

It’s amazing looking back at that lecture because the computer industry unfolded exactly as she said it would.

COBOL
Grace Hopper invented the first compiled computer language then later went on to create the COBOL language (an acronym for COmmon Business-Oriented Language). COBOL was a huge improvement over previous machine code languages. Instead of programming with numbers that represented machine instructions you could use an English like language that got converted (Compiled) into the computer machine code.

She told us a funny story that she was once visiting some COBOL programmers in Japan. Their only English was limited to those words that were in the COBOL language, words like MOVE, DISPLAY, EXIT, STOP, RUN, OPEN, READ, FROM, IN, WITH, UNTIL, GO TO, IF, THEN, ELSE, etc. So they were able to communicate in a crude way and decided that they all wanted to “GO TO” dinner.

Nanoseconds
When she was involved with the construction of the next generation of computers her engineers kept expressing things in nanoseconds which she could not understand. A nanosecond is one billionth of a second, a measure of time so infinitesimally small that that the human mind cannot comprehend it. So she called over to the engineering building and asked them to produce a nanosecond for her. They came up with a strip of wire 11.8 inches long. This represented the distance electricity could travel in 1 nanosecond. So it became a tradition for her to give out “Nanoseconds” at her lectures.

A little later in her lecture she pulled a big coil of wire out of her briefcase. It was about a foot in circumference and 2 inches thick. Electricity travels 984 ft. to a microsecond so this is what a microsecond looks like she said. She joked we should hang a micro second around the necks of programmers when they throw them away. She went on to say that you could make picoseconds (a trillionth of a second) by putting nanoseconds in a blender and chopping them up.

Debugging
Grace Hopper is credited with popularizing the term “debugging” as it relates to computers. Back in the early days the first computers had lots of vacuum tubes and mechanical relay switches. With thousands of moving parts there were frequent breakdowns. One evening when she removed a moth from the computer and taped it into a log book. That book is now in the Smithsonian Museum.

Backwards Clock
In her office she had a clock that ran backwards and all of the numbers were backwards too. She said it took a little getting used to but you could actually read the time. She kept it there as a reminder to her engineers that just because we did something a certain way in the past doesn’t mean we have to do it that way in the future. This was her way of getting them to “think outside of the box” long before the term “think outside of the box” was invented.

Inspiration to All
Sadly, Rear Admiral Grace Murray Hopper died on January 1, 1992 at the age of 85. She is dearly missed by all of the people whose lives she touched. Because of her many accomplishments she is often referred to as “Amazing Grace”. In 1997 the US Navy commissioned the USS Hopper, a guided missile destroyer, in her honor. Even today Grace Hopper serves as a powerful role model especially for young women considering a career in computer science. I will forever be honored by the opportunity to meet her in person and will never forget how she inspired me at the beginning of my computer science career.